Martyn Downer on the subject of Latest News. Posted on August 10th, 2017.

Two years ago we sold this rare enamel and gem set armorial brooch gifted to a bridesmaid at the marriage of John Crichton-Stuart, 3rd Marquess of Bute to Gwendolin Fitzalan-Howard on 16 April 1872. 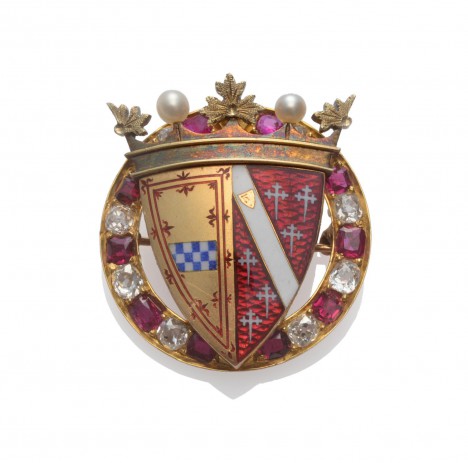 Gold, gem-set and enamel brooch for the marriage of the 3rd Marquess of Bute in 1872

We have now discovered a similar gem-set, enamel and glazed pendent locket mounted with plaited hair and the monogram BB which celebrates the marriage of  their son John Crichton-Stuart, 4th Marquess of Bute, (1881-1947) to Augusta Mary Monica Bellingham (1880-1947) at Castle Bellingham, Kilsaran, County Louth, Ireland  on 6 July 1905. The lavish ceremony was the Society event of the year in Ireland and, remarkably, was captured on film in what is believed to be the world’s first wedding film. 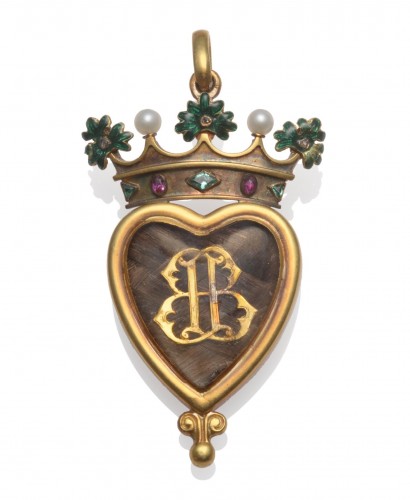 Gold, enamel and gem-set hair locket pendent for the marriage of the 4th Marquess of Bute in 1905

ohn Crichton-Stuart succeeded as 4th marquess following the early death of his father in October 1900. Like him, the new marquess had a keen interest in art and architecture which is represented in this unusual locket. Created in the manner of a Scottish ancestral jewel, the glazed locket contains plaited hair presumably belonging to the marquess’s young bride Augusta Bellingham, daughter of  Sir Henry and Lady Bellingham.  The hair is mounted with the initials of bride and groom entwined in Gothic style in tribute to the Bute family’s enthusiasm for early architecture as seen at Mount Stuart, the ancestral seat on the Isle of Bute. The locket is surmounted with the coronet for a marquess decorated in enamel and further set with pearls, diamonds, rubies and emeralds. Unusually for this period, both John and Augusta were Roman Catholics and the jewel also has the feeling of a reliquary. The locket measures 50 mm long and retains its original fitted case for its Scottish maker: T.Smith & Sons at 28 Princes Street, Edinburgh from whom it is known the new marquess also ordered silver such as a regimental trophy cup now in the collection of The Black Watch Museum.

This entry was posted on Thursday, August 10th, 2017 at 5:20 pm; on the subject of Latest News. Tags: armorial, Augusta Bellingham, Marquess of Bute, Mount Stuart, The Black Watch Museum