The admiral’s carriage « My Family Silver

Martyn Downer on the subject of Listed for sale at My Family Silver. Posted on April 20th, 2016.

The Armoury St James’s  are offering for sale this rare carriage panel decorated with the coat of arms of Admiral Sir Richard Bickerton (1759-1832) and his wife Anne (died 1850), daughter of James Athill of Antigua:

Arms: (on the dexter) quarterly, first and fourth, sa. on a chev. erminois, three pheons az. on a canton of honourable augmentation of the last, a mullet and increscent ar. within a bordure, embattled, or. (for Bickerton); second and third, quarterly, or. and gu. the quarterings divided by a cross, composed of pearls, ppr. in the first and fourth quarters, a cross az.; in the second and third, three lions, passant, guardant, two and one, or. over all, on the centre chief point, a roundle ar. theron a Turk’s cap ppr. (viz. crimson, trimmed with gold, and a green feather in it, for Hussey); (on the sinister) Ar. on a chevron Sa. three crescents Or (for Athill of Antigua)

Supporters: the dexter, a sailor ppr. habited in a blue jacket, with white lappels, trousers and shirt of the last, waistcoat red, stockings check, black neckerchief and shoes, a sword in it scabbard by his side ppr. and holding in his exterior hand a flag az. line and staff ppr. on the flag a pheon or. and underneath, the word “Egypt” in gold letters; the sinister, a female figure, crowned with three pyramids ar. habited in a white robe, with hieroglyphic characters thereon, across her a yellow sash, behind her a flowing robe, coming over her sinister arm green, face, arm, neck ppr. holding in her dexter hand a systrum (viz. a musical instrument) near her an ibis ppr. 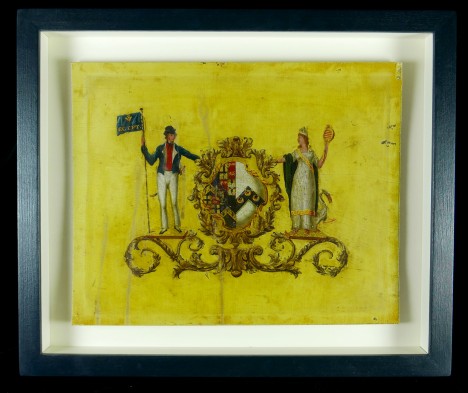 Even by the extraordinary standards of his day, Richard Bickerton enjoyed a remarkable life at sea. Born in a naval family – his father was also an admiral – Bickerton’s name was entered on the muster of his father’s ship Marlborough in 1771 although his active career did not begin until 1774. Family interest saw rapid promotion to master in 1779 and post-captain in 1781. Much of his early career was passed on the West Indian station serving under Admiral Rodney then Admiral Sir Samuel Hood and it was in Antigua that he met his wife Anne Athill, daughter of a physician on the island. In 1792 he succeeded to his father’s baronetcy and soon afterwards returned to active service in the Channel fleet. After a period as second in command at Portsmouth, he sailed to join Admiral Lord Keith in the Meditteranean hoisting his flag in Swiftsure, 74 guns, with Benjamin Hallowell, a veteran of the recent battle of the Nile, as his flag captain. 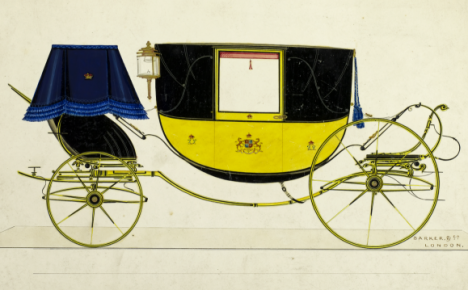 In 1801 he sailed with the British expedition to Egypt conducting the blockade of Alexandria and supporting the land troops under command of Lieutenant-General Hutchinson. Following the capitulation of the French to Major-General Coote in August, Bickerton was created knight of the Crescent by the Sultan of Turkey, joining this exclusive and newly-inaugurated Ottoman Order of Chivalry which comprised Admiral Lord Nelson, Keith, Hutchinson and Coote. Bickerton’s service in Egpyt was recognised in the ensuing grant of supporters to his coat of arms. 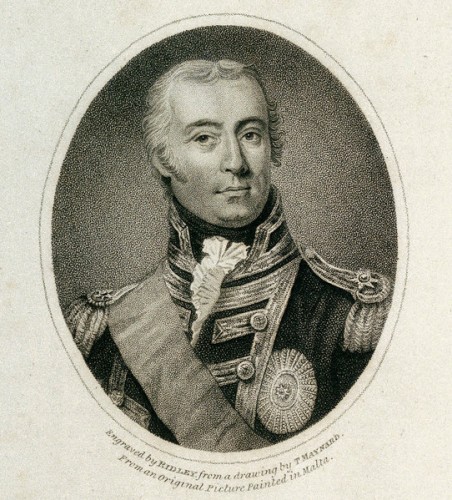 Sir Richard Bickerton, Bt. Rear Admiral of the Red, from an original painting by an Italian artist in Malta, published 1 June 1805. Bickerton is wearing the Sultan of Turkey’s Order of the Crescent for his service in Egpyt.

Bickerton remained as commander-in-chief in the Meditteranean during the short peace of Amiens then as second in command when Nelson returned with the resumption of hostilities.  The two men were in frequent contact and held each other in high esteem although a liver complaint would force Bickerton back to England a month before Trafalgar. On his return, Bickerton was promoted admiral in 1810 and eventually general in the Royal Marines. Like his father, he entered parliament and was also a fellow of the Royal Society. In 1823, he assumed his mother’s maiden name of Hussey before Bickerton on inheriting her estates in Huntingdonshire. He died in 1832 when the baronetcy became extinct. There is a monument to Admiral Bickerton in Bath Abbey.

This entry was posted on Wednesday, April 20th, 2016 at 6:06 pm; on the subject of Listed for sale at My Family Silver. Tags: Admiral Lord Nelson, Admiral Rodney, Admiral Sir Samuel Hood, battle of the nile, Benjamin Hallowell