A soldier’s souvenir of the Peninsular War « My Family Silver

A soldier’s souvenir of the Peninsular War

Martyn Downer on the subject of Uncategorized. Posted on July 26th, 2015. 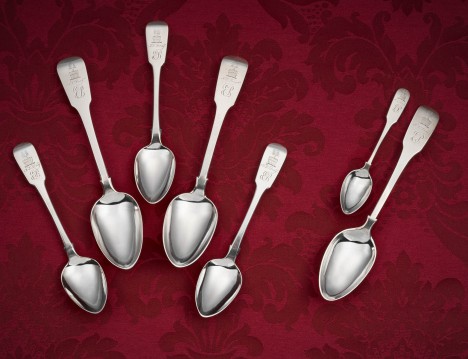 These spoons belonged to Edward Penfold (1789-1861), who served for four years as cornet then lieutenant (1812) in the 12th Light Dragoons during the Peninsular Wars. Placed on half pay in 1817, Penfold returned to his home at Tiverton in Devon where he arranged for a service to be made locally in Exeter to match silver acquired in Portugal during the war.

Raised in 1715 to counter the Jacobite threat, in 1763 the regiment was re-styled by George III as The 12th (Prince of Wales’s) Regiment of (Light) Dragoons and granted the use of prince of wales feathers and motto “Ich Dien” as its badge. Following amalgamations, and conversion to the lance in 1816, the regiment today is known as 9th/12th Royal Lancers (Prince of Wales’s)

For much of its early life, the 12th Light Dragoons were based on garrison duty in Ireland where a young Arthur Wellesley, later duke of Wellington, joined the regiment as a subaltern. The outbreak of war with France finally brought the regiment into action. The dragoons accompanied the expeditionary force to France in 1793 and then joined Lieutenant General Sir Ralph Abercrombie’s 1801 invasion of Egypt where it won its first battle honour. In 1809, the regiment took part in the ill-fated Walcheron campaign though it saw no action. 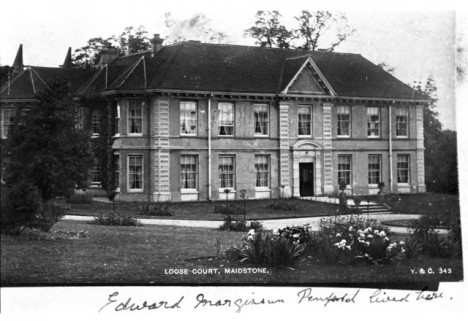 Edward Penfold, son of Edward Margesson Penfold (c1759-1848) a wealthy banker of Loose Court, Maidstone,  joined the 12th Light Dragoons as a young cornet in 1811 shortly before the regiment, under new command of Lieutenant Colonel Fredrick Ponsonby (1783-1837),  sailed for Portugal. Arriving in Lisbon on 25 June 1811 – when Penfold may have acquired his silver – the regiment was soon marching to Spain where it supported the successful but bloody sieges at Ciudad Rodrigo and Badajoz. John Vandeleur, who joined the regiment as lieutenant the same year as Penfold, described Lisbon at the time: “The air of Portugal is not as pure as that of England in my opinion…the Portuguese are not the most cleanly people in the world. Like the Scotch they empty the rubbish of the house out of the windows in the night-time after nine o’clock. I was not up to the system the first night I was in Lisbon, and as i was returning from duty to the barracks, which are in a convent, there were the contents of a vessel discharged at me. However, I was fortunate enough to escape it, but my servant received it full upon his head…they ask most immoderately dear for whatever we want. They asked me 15 dollars for a pair of second-cloth trousers..”

Promoted lieutenant by purchase in 1812, Penfold charged with his regiment at the famous battles of Salamanca (1812) – where it won its second battle honour – and at Vitoria (1813) where the 12th turned the French right and barred their retreat. The regiment then pursued the enemy into France taking part in operations in the Pyrenees and South of France. 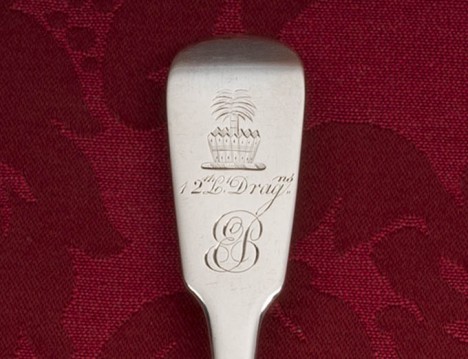 With the return of Napoleon from Elba, the 12th joined the Allied expeditionary force to Netherlands under the duke of Wellington. However, it appears Penfold remained in England as his name does not appear on the medal roll for the battle of Waterloo where his regiment suffered grievous losses and Ponsonby severely wounded.

In retirement Penfold settled in Devon where he died unmarried in 1861.

Bamford, Andrew, With Wellington’s Outposts: The Peninsula and Waterloo Letter of John Vandeleur (2015)

Bamford, Andrew, Gallantry and Discipline: The 12th Light Dragoons at War with Wellington (2014)

This entry was posted on Sunday, July 26th, 2015 at 2:13 pm; on the subject of Uncategorized. Tags: 9th/12th Royal Lancers (Prince of Wales's), Badajoz, battle of waterloo, battles of Salamanca, Ciudad Rodrigo, Duke of Wellington, Vitoria