John Culme on the subject of Uncategorized. Posted on October 15th, 2009. 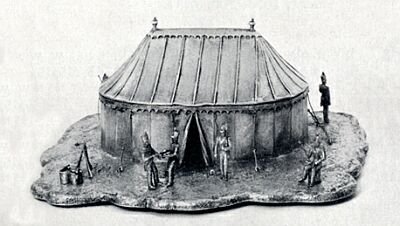 a Victorian silver table snuff box in the form of a mess tent, Joseph Angell, London, 1850, presented to Major Loftus Francis Jones on his retirement from the 96th Regiment of Foot. The gilt interior of this unique object is engraved with an inscription, recording the fact that Jones (d. 1853) had been with the regiment since its formation in 1824. (photo by courtesy of Sotheby’s, London, 5 March 1970, lot 89)

Recently someone asked me if I had a favourite among the many silversmiths whose work I hadÂ  examined over the years. My head spun at such a question! Few apart from my colleagues in the field have been so fortunate to handle so much, although even a casual museum visitor cannot fail to acknowledge the glorious legacy we have from silversmiths’ endeavours, past and present.

My answer to that question depends on so many factors, not least the latest fascinating piece I have been researching or cataloguing, in which case Paul de Lamerie springs to mind. Then again, certain silversmiths were specialists, like Thomas Pitts whose workshop was known for its epergnes, or Ebenezer Coker and the Cafes for candlesticks.

Under torture, I might have to admit that a favourite is the Angell family business of silversmiths which flourished in London throughout the 19th Century, particularly that of Joseph Angell (1816-1891) whose stock, some of which was enamelled, attracted so much attention at the Great Exhibition of 1851. An unusual example of the Angells’ silver, a special order, was a table snuff box in the form of a mess tent made for presentation by his brother officers to Major Loftus Francis Jones on his retirement from the 96th Regiment of Foot. Detachments of the latter having been deployed for convict ships heading for the Antipodes, The Courier, a Tasmanian newspaper, reported in February 1851 on Major Jones’s box, telling its readers that it was ‘elegantly wrought in frosted silver.’