John Culme on the subject of Uncategorized. Posted on September 10th, 2009. 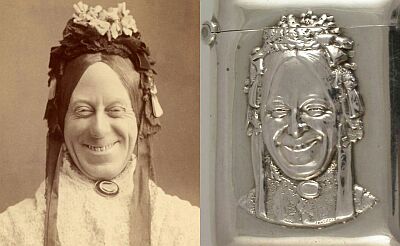 W.S. Penley in the title role of Charley’s Aunt and a detail of the die-stamped portrait on one of the silver vesta cases distributed to the audience on the occasion of the play’s third anniversary performance, 21 December 1895 (photos: T.C. Turner & Co, London, probably 1892 / John Culme’s Footlight Notes Collection; Steppes Hill Farm Antiques)

Souvenirs of hit West End shows are not what they used to be and not just because nowadays they are no longer free. The golden age of theatrical impresarios’ generosity flourished during the thirty years or so before World War I. Tickets for ‘souvenir nights’ sold like proverbial hot cakes and no wonder, when every member of the audience could return home with a cherished memento. These often took the form of a specially printed booklet, like that produced for A Gaiety Girl (Prince of Wales’s, London, 14 October 1893): highly finished colour lithograph caricatures of characters from the play, with an arresting cover-sheet designed by Dudley Hardy, all threaded together with pink silk ribbon.

Managements liked to surprise their patrons. So it was on 21 December 1895 at London’s then Globe Theatre that the audience attending the third anniversary performance of Brandon Thomas‘s highly successful farce Charley’s Aunt, found themselves recipients of silver vesta cases made by Walker & Hall, each etched on one side with the date. On the other was a slightly raised die-stamped portrait of the play’s leading character, Lord Fancourt Babberley masquerading as Charley Wykeham’s Aunt Donna Lucia dâ€™Alvadorez from Brazil (‘where the nuts come from’). Although the part was played by four different actors during Charley’s Aunt‘s record breaking first run of 1,466 performances, this portrait is actually based on a photograph of W.S. Penley (1852-1912), the actor who created the role and whose name will be forever connected with the part.